—Excerpt from A Vision of Lucy 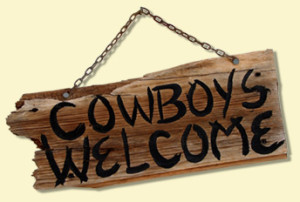 The Internet of the Old West

Scams, advertisements and demands from Prince “Wants Your Money” from some foreign country: Sound like your e-mail? You’re close. Only back in the 19th and 20th centuries it was called the telegraph. Not only did the telegraph create a quicker way to get junk mail, it changed the way Victorians lived, did business, received news and yes, even fell in love.

In his fascinating book, The Victorian Internet, Tom Standage tells us that there really is nothing new under the sun. Meetings, chat rooms, games, and illicit affairs were just as prevalent 150 years ago as they are today. And what, for that matter is a text message but a telegram, forcing people to be brief and to the point? (Tell that to your teen!)

If you think acronyms are a modern concept, think again. Telegram security was an issue and secret codes were devised. Government regulators tried to control this new means of communication, but failed. Sound familiar?

Though the telegraph was first conceived in the 1600s and an optical one developed in the 1700s, it took a tragedy to make the dream of fast communication over long distances a reality.

Samuel Morse was an artist commissioned to paint a portrait in Washington. Upon receiving a letter informing him of his wife’s sudden death, he returned to his New Haven home as quickly as possible, but he had already missed her funeral. This had to be very much on his mind seven years later when in a chance conversation aboard a ship he learned that electricity could travel along any length of wire almost instantaneously. Unaware that others had tried and failed to create a fast way of communications using this method, he immediately set to work.

It took Samuel Morse 12 years to perfect his invention and many trials and tribulations, but he was convinced that this new way of communicating would allow a husband to reach a dying wife’s bedside or save the life of a child. He thought it might even prevent wars. His hard work and perseverance paid off. On May 24, 1844, he sent the telegraph message “what hath God wrought?” from the Supreme Court chamber in the Capitol in Washington, D.C., to the B & O Railroad Depot in Baltimore, Maryland.

No longer was it necessary to communicate solely through trains, mail or horse. Even Morse himself couldn’t have imagined how telegraphic communications could change society.

Boon and Bust for Outlaws

Then as now, the first to embrace the new technology were criminals. The first telegrams sent were horse bets and lotteries. A man named Soapy Smith opened a fake telegraph office in Skagway, Alaska during the gold rush of 1897. The wires went only as far as the wall. The telegraph office obtained fees for “sending” messages from gold-laden victims. Though outlaws such as Butch Cassidy routinely cut wires or jammed telegraph keys to prevent lawmen from tracking them down, the telegraph eventually helped put an end to the train robberies that plagued the west.

Western Union might have been the first equal opportunity employer as women telegraphers were prevalent. The ratio of men to women in the New York office in the 1870s was two to one.

Wire romances bloomed and one couple even married by telegraph. However, not all online romances had a happy ending. In 1886, The Electrical World magazine ran an article titled The Dangers of Wired Romances. That same article would no doubt be just as timely today.

Tom Standage writes that time traveling Victorians arriving in today’s world might be impressed with our flying machines but they would be unimpressed with the Internet. They did, after all, have one of their own.